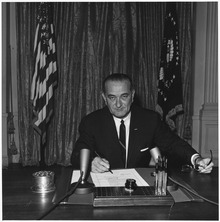 President Johnson as he signs the resolution on August 10, 1964

It is of historical significance because it gave U.S. President Lyndon B. Johnson authorization, without a formal declaration of war by Congress, for the use of "conventional'' military force in Southeast Asia. Specifically, the resolution authorized the President to do whatever necessary in order to assist "any member or protocol state of the Southeast Asia Collective Defense Treaty". This included involving armed forces.

It was opposed in the Senate only by Senators Wayne Morse (D-OR) and Ernest Gruening (D-AK). Senator Gruening objected to "sending our American boys into combat in a war in which we have no business, which is not our war, into which we have been misguidedly drawn, which is steadily being escalated". (Tonkin Gulf debate 1964) The Johnson administration subsequently relied upon the resolution to begin its rapid escalation of U.S. military involvement in South Vietnam and open warfare between North Vietnam and the United States. 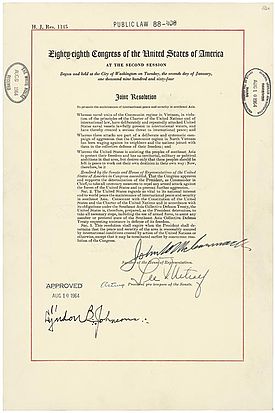 The USS Maddox, a U.S. destroyer, was conducting a DESOTO patrol (Moise 1996, p. 50) in the waters of the Gulf of Tonkin on August 2, 1964, when it was attacked by three North Vietnamese Navy torpedo boats from the 135th Torpedo Squadron (Moise 1996, p. 78), which were attempting to close their range on the Maddox for effective torpedo fire (1,000 yards was maximum effective range for the torpedoes) (Moise 1996, p. 71) (Hanyok 2000) Maddox fired over 280 5-inch shells (Moise 1996, p. 78) and the boats expended their 6 torpedoes (all misses) and some 14.5-mm machinegun fire. Breaking contact, the combatants commenced going their separate ways, when the three torpedo boats, T-333, T-336, and T-339 were then attacked by four USN F-8 Crusader jet fighter bombers from the aircraft carrier USS Ticonderoga. (Moise 1996, p. 82) The Crusaders reported no hits with their Zuni rockets, but scored hits on all three torpedo boats with their 20-mm cannons; damaging all three boats. Two days later, on August 4, the Maddox and the destroyer Turner Joy both reported to be under attack, again, by North Vietnamese torpedo boats; during this alleged engagement, the Turner Joy fired approximately 220 3-inch & 5-inch shells at radar controlled surface targets. (Moise 1996, p. 158) Hanoi subsequently insisted that it had not launched a second attack. A later investigation by the Senate Foreign Relations Committee revealed that the Maddox had been on an electronic intelligence (DESOTO) mission. It also learned that the U.S. Naval Communication Center in the Philippine Islands, in reviewing ships' messages, had questioned whether any second attack had actually occurred. (NYT 1968) In 2005, an internal National Security Agency historical study was declassified; it concluded that the Maddox had engaged the North Vietnamese Navy on August 2, but that there may not have been any North Vietnamese Naval vessels present during the engagement of August 4. The report stated:

It is not simply that there is a different story as to what happened; it is that no attack happened that night. [...]

In truth, Hanoi's navy was engaged in nothing that night but the salvage of two of the boats damaged on August 2. (Hanyok 2000, p. 3)

In 1965, President Johnson commented privately: "For all I know, our Navy was shooting at whales out there." (KQED 2006)

Within hours, President Johnson ordered the launching of retaliatory air strikes (Operation Pierce Arrow) on the bases of the North Vietnamese torpedo boats and announced, in a television address to the American public that same evening, that U.S. naval forces had been attacked. Johnson requested approval of a resolution "expressing the unity and determination of the United States in supporting freedom and in protecting peace in southeast Asia", stating that the resolution should express support "for all necessary action to protect our Armed Forces", but repeated previous assurances that "the United States ... seeks no wider war". As the nation entered the final three months of political campaigning for the 1964 elections (in which Johnson was standing for election), the president contended that the resolution would help "hostile nations ... understand" that the United States was unified in its determination "to continue to protect its national interests". (President's Message to Congress 1964)

On August 6, U.S. Secretary of Defense Robert S. McNamara testified before a joint session of the Senate Foreign Relations and Armed Services committees. He stated that the Maddox had been "carrying out a routine mission of the type we carry out all over the world at all times" and denied that it had been in any way involved in South Vietnamese patrol boat raids on the offshore islands of Hon Me and Hon Nieu on the nights of July 30 and July 31. (NYT 1968) The administration did not, however, disclose that the island raids, although separate from the mission of the Maddox, had been part of a program of clandestine attacks on North Vietnamese installations called Operation Plan 34A. These operations were carried out by U.S.-trained South Vietnamese commandos under the control of a special operations unit of the U.S. Military Assistance Command, Vietnam called the Studies and Operations Group. (Andradé & Conboy 1999)

After fewer than nine hours of committee consideration and floor debate, Congress voted, on August 10, 1964, on a joint resolution authorizing the president "to take all necessary steps, including the use of armed force, to assist any member or protocol state of the Southeast Asia Collective Defense Treaty requesting assistance in defense of its freedom". (H.J. RES 1145 1964) The unanimous affirmative vote in the House of Representatives was 416–0. (However, Republican Congressman Eugene Siler of Kentucky, who was not present but opposed the measure, was "paired" with another member who favored the resolution—i.e., his opposition was not counted, but the vote in favor was one less than it would have been.) The Senate conferred its approval by a vote of 98–2. Some members expressed misgivings about the measure, but in the end, Democratic Senators Wayne Morse of Oregon and Ernest Gruening of Alaska cast the only nay votes. (Kenworthy 1964) At the time, Senator Morse warned that "I believe this resolution to be a historic mistake." (Tonkin Gulf debate 1964)hh

By 1967, the rationale for what had become a costly U.S. involvement in the Vietnam War was receiving close scrutiny. With opposition to the war mounting, a movement to repeal the resolution—which war critics decried as having given the Johnson administration a "blank check"—began to gather steam.

An investigation by the Senate Foreign Relations Committee revealed that the Maddox had been on an electronic intelligence collection mission off the North Vietnamese coast. (Finney 1968) It also learned that the U.S. Naval Communication Center in the Philippine Islands, in reviewing ships' messages, had questioned whether any second attack had actually occurred. (NYT 1968)

The administration of President Richard Nixon, which took office in January 1969, initially opposed repeal, warning of "consequences for Southeast Asia [that] go beyond the war in Vietnam". In 1970 the administration began to shift its stance. It asserted that its conduct of operations in Southeast Asia was based not on the resolution but was a constitutional exercise of the President's authority, as Commander in Chief of U.S. military forces, to take necessary steps to protect American troops as they were gradually withdrawn (NYT 1970) (the U.S. had begun withdrawing its forces from Vietnam in 1969 under a policy known as "Vietnamization").

Mounting public opinion against the war eventually led to the repeal of the resolution, which was attached to a bill that Nixon signed in January 1971. (NYT 1971) Seeking to restore limits on presidential authority to engage U.S. forces without a formal declaration of war, Congress passed the War Powers Resolution in 1973, over Nixon's veto. The War Powers Resolution, which is still in effect, sets forth certain requirements for the President to consult with Congress in regard to decisions that engage U.S. forces in hostilities or imminent hostilities.