USNS Observation Island (T-AGM-23), also known as ex-MA-28, ex-YAG-57, ex-E-AG-154, Empire State Mariner, is the historic naval vessel that in 1969 launched the first Poseidon Fleet Ballistic Missile ever successfully deployed from a vessel at sea, earning the ship and crew the Meritorious Unit Commendation.[3][4] The ship is currently one of two Missile Range Instrumentation Ships operated by the Military Sealift Command.[5] One of the radars it carries is the AN/SPQ-11 Cobra Judy Passive Electronically Scanned Array radar.

USNS Observation Island was built as a "Mariner" class merchant ship, launched in August, 1953, and was acquired by the Navy in September 1956 for use as a fleet ballistic missile test ship. The vessel was converted at Norfolk Naval Shipyard, and kept in reserve as a Maritime Administration asset from 1972 until 1977. In August 1977, Observation Island was reacquired by the U.S. Navy and transferred to Military Sealift Command, where it was reclassified as T-AGM 23, a missile range instrumentation ship.[6]

USNS Observation Island was converted to the first naval ship that had a fully integrated Fleet Ballistic Missile System. No major hull or engineering changes were made to the ship during this conversion. Because of the refit, the ship underwent a shakedown cruise at Guantanamo Bay.[7]

In 1983, the first ever (USA) naval installation of a phased-array radar system was completed and tested on the USNS Observation Island. Weeks of sea trials were spent testing and perfecting the software required for a nonstable platform.

While the Observation Island was stationed at Port Canaveral, adjacent to NASA at Cape Kennedy, Florida, in the very week Apollo 11 was launched from the Cape, the ship also made history by beginning its mission to achieve "the first successful at-sea firing of the POSEIDON Fleet Ballistic Missile." (Admiral E.R. Zumwalt Jr., 1971).[3][4] The commendation was earned by the 1969 crew and was awarded in 1971 while the ship was stationed at Pearl Harbor, Hawaii for various range survey duties. In later 71 she was decommissioned for awhile, though later she reappeared for other missions as a USNS ship (see above). The success of the mission earned the ship and crew the Meritorious Unit Commendation from the Secretary of the Navy. As taken directly from the Commendation letter sent to crewman SD2 Rolando S. Caparas, (along with cover letter from Commanding Officer, Captain W.C. Dotson), Admiral Zumwalt wrote of the Commendation:

The Navy Meritorious Unit Commendation can be awarded to a unit that has performed service of a character comparable to that which would merit a Bronze Star in a combat situation, or an equivalent award in a non-combat situation to an individual. Photocopies of both letters are inserted below. 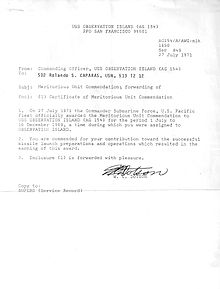 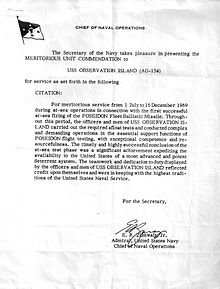 In 2008, the USNS Observation Island was part of the U.S. Government program attempting to use an anti-missile missile to shoot down satellites by tracking the satellite before and after the missile launch.[9]

This article incorporates text from the public domain Dictionary of American Naval Fighting Ships. The entry can be found here.