Kapustin Yar (Russian: Капустин Яр) is a Russian rocket launch and development site in Astrakhan Oblast, between Volgograd and Astrakhan. Known today as Znamensk (Russian: Знаменск), it was established 13 May 1946 and in the beginning used technology, material and scientific support from defeated Germany. Numerous launches of test rockets for the Russian military were carried out at the site, as well as satellite and sounding rocket launches. 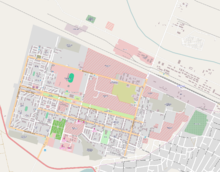 Open Street Map of the area.

The 4th Missile Test Range "Kapustin Yar" was established by a decree of the Soviet Government "On Questions of Jet Propelled Weapons" on 13 May 1946. The test range was created under the supervision of General-lieutenant Vasily Voznyuk (commander in chief of the test range 1946-1973) in the desert north end of the Astrakhan region. The first rocket was launched from the site on 18 October 1947; it was one of eleven German A-4s that had been captured.

With the further growth and development, the site became a cosmodrome, serving in this function since 1966 (with interruption in 1988-1998). The town of Znamensk was established to support the scientists working on the facilities, their families and supporting personnel. Initially this was a secret city, not to be found on maps and inaccessible to outsiders.

Evidence of the importance of Kapustin Yar was obtained by Western intelligence through debriefing of returning German scientists and spy flights. The first such flight reportedly took place in mid-1953 using a high flying Canberra aircraft of the RAF. Numerous circumstantial reports suggest this flight took place, using the Canberra PR3 WH726, but the UK Government has never admitted such a flight took place nor have any of the supposed participants provided direct evidence[2][3] The Canberra took off from Giebelstadt Air Base, Germany, and, flying via the Volga to the Caspian Sea, landed at Tabriz, Iran.

Due to its role as a development site for new technology, Kapustin Yar is also the site of numerous Soviet-era UFO sightings and has been called "Russia's Roswell".[4]