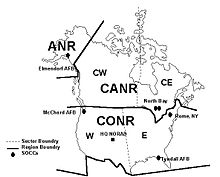 North American Aerospace Defense Command (NORAD, /ˈnɔræd/) is a combined organization of the United States and Canada that provides aerospace warning, air sovereignty, and defense for North America.[3] Headquarters for NORAD and the NORAD/USNORTHCOM command center are located at Peterson Air Force Base in El Paso County, near Colorado Springs, Colorado. The nearby Cheyenne Mountain nuclear bunker has the Alternative Command Center.

CINCNORAD maintains the NORAD headquarters at Peterson Air Force Base near Colorado Springs, Colorado. The NORAD and USNORTHCOM Command Center at Peterson AFB serves as a central collection and coordination facility for a worldwide system of sensors designed to provide the commander and the leadership of Canada and the U.S. with an accurate picture of any aerospace or maritime threat.[4] NORAD has administratively divided the North American landmass into three regions: the Alaska NORAD (ANR) Region, under Eleventh Air Force; the Canadian NORAD (CANR) Region, under 1 Canadian Air Division, and the Continental U.S. (CONR) Region, under 1 AF/CONR-AFNORTH. Both the CONR and CANR regions are divided into eastern and western sectors.

The Alaska NORAD Region (ANR) maintains 24-hour-a-day, seven-day-a-week capability to detect, validate and warn of any atmospheric threat in its area of operations from its Regional Operations Control Center (ROCC) at Elmendorf AFB, Alaska.

ANR also maintains the readiness to conduct a continuum of aerospace control missions, which include daily air sovereignty in peacetime, contingency and/or deterrence in time of tension, and active air defense against manned and unmanned air-breathing atmospheric vehicles in times of crisis.

ANR is supported by both active duty and reserve units. Active duty forces are provided by Eleventh Air Force and the Canadian Forces, and reserve forces provided by the Alaska Air National Guard. Both 11 AF and the CF provide active duty personnel to the ROCC to maintain continuous surveillance of Alaskan airspace.

In cooperation with the Royal Canadian Mounted Police and the United States drug law enforcement agencies, the Canadian NORAD Region monitors all air traffic approaching the coast of Canada. Any aircraft that has not filed a flight plan may be directed to land and be inspected by RCMP and Canada Border Services Agency.

The Continental NORAD Region (CONR) is the component of NORAD that provides airspace surveillance and control and directs air sovereignty activities for the Continental United States (CONUS).

It plans, conducts, controls, coordinates and ensures air sovereignty and provides for the unilateral defense of the United States. It is organized with a combined First Air Force command post at Tyndall AFB and two Sector Operations Control Centers (SOCC) at Rome, New York for the US East ROCC and McChord Field, Washington for the US West ROCC manned by active duty personnel to maintain continuous surveillance of CONUS airspace.

Recommended by the Joint Canadian-U.S. Military Group in late 1956, approved by the United States JCS in February 1957, and announced on 1 August 1957;[6] the "establishment of [NORAD] command headquarters" was on 12 September 1957,[7] at Ent Air Force Base's 1954 blockhouse. The 1958 international agreement designated the NORAD commander always be a US officer (Canadian vice commander), and "RCAF officers…agreed the command's primary purpose would be…early warning and defense for SAC's retaliatory forces."[8]:252 In late 1958, Canada and the U.S. started the "Continental Air Defense Integration, North (CADIN)", for the SAGE air defense network.[8]:253 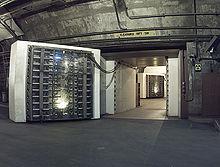 The 25-ton North blast door in the Cheyenne Mountain nuclear bunker is the main entrance to another blast door (background) beyond which the side tunnel branches into access tunnels to the main chambers.

Canada's NORAD bunker with a SAGE AN/FSQ-7 computer was constructed 1959-63, and each of the USAF's eight smaller AN/FSQ-8s provided NORAD with data and could command the entire US air defense. The RCAF's 1950 "ground observer system, the Long Range Air Raid Warning System,"[9] was discontinued and on 31 January 1959, the US Ground Observation Corps was deactivated.[8]:222 The Cheyenne Mountain nuclear bunker's planned mission was expanded in August 1960 to "a hardened center from which CINCNORAD would supervise and direct operations against space attack as well as air attack"[10] (NORAD would be renamed North American Aerospace Defense Command in March 1981). The Secretary of Defense assigned on 7 October 1960, "operational command of all space surveillance to Continental Air Defense Command (CONAD) and operational control to North American Air Defense Command (NORAD)".[11]

The JCS placed the Ent AFB Space Detection and Tracking System (496L System with "Philco 2000/Model 212" computer)[12] "under the operational control of CINCNORAD on December 1, 1960";[13] during Cheyenne Mountain nuclear bunker excavation, and the "joint SAC-NORAD exercise…Sky Shield II"--and on 2 September 1962--"Sky Shield III" were conducted for mock penetration of NORAD sectors.[14] NORAD command center operations moved from Ent AFB to the 1963 partially underground "Combined Operations Center" for Aerospace Defense Command and NORAD[15] at the Chidlaw Building. NORAD had an exhibit at the 1964 World's Fair,[16] and on 30 October 1964, "NORAD began manning" the Cheynne Mountain Combat Operations Center[13] and by 1965, about 250,000 US and Canadian personnel were involved in the operation of NORAD,[not in citation given][17] On 1 January 1966, Air Force Systems Command turned the COC over to NORAD[18] (the NORAD Cheyenne Mountain Complex was accepted on 8 February.)[13]:319

On at least three occasions, NORAD systems failed such as on 9 November 1979, when a technician in NORAD loaded a test tape but failed to switch the system status to "test", causing a stream of constant false warnings to spread to two "continuity of government" bunkers as well as command posts worldwide.[22] On 3 June 1980, and again on 6 June 1980, a computer communications device failure caused warning messages to sporadically flash in U.S. Air Force command posts around the world that a nuclear attack was taking place.[23] During these incidents, Pacific Air Forces properly had their planes (loaded with nuclear bombs) in the air; Strategic Air Command did not and took criticism because they did not follow procedure, even though the SAC command knew these were almost certainly false alarms (as did PACAF).[citation needed] Both command posts had recently begun receiving and processing direct reports from the various radar, satellite, and other missile attack detection systems, and those direct reports simply did not match anything about the erroneous data received from NORAD.[citation needed] During the Cold War, NORAD did not send interceptors to intercept every flight of Russian bombers near U.S. airspace because NORAD did not wish to feed Russia's propaganda about their illusion of power[need quotation to verify] (CINCNORAD: Admiral James A. Winnefeld, Jr.; 2010).[24] 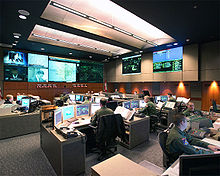 NORAD/USNORTHCOM Alternative Command Center prior to the Cheyenne Mountain Realignment.[25]

Following the 1979 Joint US-Canada Air Defense Study, the command structure for aerospace defense was changed, e.g., "SAC assumed control of ballistic missile warning and space surveillance facilities" on 1 December 1979 from ADCOM.[26]:48 The Aerospace Defense Command major command ended 31 March 1980. and its organizations in Cheyenne Mountain became the "ADCOM" specified command under the same commander as NORAD,[15] e.g., HQ NORAD/ADCOM J31 manned the Space Surveillance Center. By 1982, a NORAD Off-site Test Facility[27] was located at Peterson AFB.[28] The DEW Line was to be replaced with the North Warning System (NWS); the Over-the-Horizon Backscatter (OTH-B) radar was to be deployment; more advanced fighters were deployed, and E-3 Sentry AWACS aircraft were planned for greater use. These recommendations were accepted by the governments in 1985. The United States Space Command was formed in September 1985 as an adjunct but not a component of NORAD.

In 1989 NORAD operations expanded to cover counter-drug operations, e.g., tracking of small aircraft entering and operating within the US and Canada.[29] DEW line sites were replaced between 1986 and 1995 by the North Warning System. The Cheyenne Mountain site was also upgraded but none of the proposed OTH-B radars are currently in operation.

After the September 11, 2001 attacks, the NORAD Air Warning Center's mission "expanded to include the interior airspace of North America."[30]

The Cheyenne Mountain Realignment[31] was announced on 28 July 2006, to consolidate NORAD's day-to-day operations at Peterson Air Force Base[32] with Cheyenne Mountain in "warm standby" staffed with support personnel.

The Commander of NORAD is always a United States Defense Department Officer confirmed by the US Senate and from 2002 has simultaneously headed USNORTHCOM, while the Deputy Commander is always Canadian. During the course of NORAD's history there have been four different United States commands associated with NORAD:[citation needed]

The NORAD commander is an American four-star General, or equivalent. Since 2004 commanders have included Admirals.

Cheyenne Mountain is a setting of the 1983 film WarGames and the Stargate television series.