From Wikipedia, the free encyclopedia
(Redirected from Johnston Island)
Jump to: navigation, search

Johnston Atoll is an uninhabited 1.03 sq mi (2.7 km2) atoll in the North Pacific Ocean[1] about 750 nmi (860 mi; 1,390 km) southwest of the Hawaii Islands. The atoll, which is located on a coral reef platform, comprises four islands. Johnston and Sand islands are both enlarged natural features, while North (Akau) and East (Hikina) are two artificial islands formed by coral dredging.[1] Johnston Atoll is grouped as one of the United States Minor Outlying Islands.

For nearly 70 years, the atoll was under the control of the American military. In that time it was used as an airbase, a naval refuelling depot and a weapons testing area. In the mid-1980s, the atoll became a facility for chemical weapons disposal. In 2004 the military base was closed; island control was handed over to civilian authorities.

Johnston is an unincorporated territory of the United States administered by the United States Fish and Wildlife Service of the Department of the Interior as part of the Pacific Remote Islands Marine National Monument. 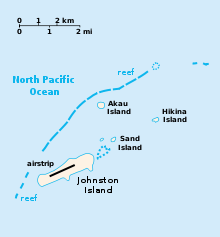 Map of the islands of Johnston Atoll, showing rim of coral reef.

Aerial approach to the former US Naval base on Johnston Atoll which closed on June 15, 2004.

The first Western record of the atoll was on September 2, 1796 when the American brig Sally accidentally grounded on a shoal near the islands. The ship's captain, Joseph Pierpont, published his experience in several American newspapers the following year giving an accurate position of Johnston and Sand Island along with part of the reef. However he did not name or lay claim to the area.[2] The islands were not officially named until Captain Charles J. Johnston of the Royal Naval ship HMS Cornwallis sighted them on December 14, 1807.

In 1858 William Parker and R. F. Ryan, chartered the schooner Palestine specifically to find Johnston Atoll. They located guano on the atoll in March 1858 and they proceeded to claim the island under the Guano Islands Act. By 1858, Johnston Atoll was claimed by both the United States and the Kingdom of Hawaii. In June 1858, Samuel Allen, sailing on the Kalama, tore down the U.S. flag and raised the Hawaiian flag. On July 27, 1858, the atoll was declared part of the domain of King Kamehameha IV. However, later that year King Kamehameha revoked the lease granted to Allen when the King learned that the atoll had been claimed previously by the United States.[3] By 1890 the atoll's entire guano deposits had been depleted (mined out) by U.S. interests operating under the Guano Islands Act.

From July 10 to July 22, 1923, the atoll was recorded in a pioneering aerial photography project.

In 1923 by Executive Order No. 4467, President Calvin Coolidge established Johnston Atoll as a federal bird refuge and placed it under the control of the U.S. Department of Agriculture.

On December 29, 1934, President Franklin D. Roosevelt transferred control of Johnston Atoll to the United States Navy in order to establish an air station, and also to the Department of the Interior to administer the bird refuge.

In 1935 personnel from the US Navy's Patrol Wing Two carried out some minor construction to develop the atoll for seaplane operation. They erected some buildings and a boat landing on Sand Island and blasted coral to clear a 3,600 feet (1,100 m) seaplane landing.[4] In November 1939 further work was commenced on Sand Island by civilian contractors to allow the operation of one squadron of patrol planes with tender support. Part of the lagoon was dredged and the excavated material was used to make a plane parking area connected by a 2,000 feet (610 m) causeway to Sand Island. Three seaplane landings were cleared, one 11,000 feet (3,400 m) by 1,000 feet (300 m) and two cross-landings each 7,000 feet (2,100 m) by 800 feet (240 m) and dredged to a depth of 8 feet (2.4 m). On Sand Island barracks were built for 400 men, a messhall, underground hospital, radio station, water tanks and a 100 feet (30 m) steel control tower.[5]

In February 1941 Johnston Atoll was designated as a Naval Defensive Sea Area and Airspace Reservation.

In September 1941 construction of an airfield on Johnston Island commenced. A 4,000 feet (1,200 m) by 500 feet (150 m) runway was built together with two 400-man barracks, two messhalls, a cold-storage building, an underground hospital, a fresh-water plant, shop buildings and fuel storage. The base was complete by 7 December 1941.[5]

On 15 December 1941 the atoll was shelled by a Japanese submarine outside the reef, several buildings were hit, but no personnel were injured.[5]

In July 1942 the civilian contractors at the atoll were replaced by 500 men from the 5th and 10th Naval Construction Battalions, who expanded the fuel storage and water production at the base and built additional facilities. The 5th Battalion departed in January 1943.[5] In December 1943 the 99th Naval Construction Battalion arrived at the atoll and proceeded to lengthen the runway to 6,000 feet (1,800 m) and add an additional 10 acres (4.0 ha) of parking to the seaplane base.[6]

On November 1, 1957, a United States Coast Guard LORAN-A station was commissioned (on Sand Island) which switched to a LORAN-C station in 1979. The station was disestablished on July 1, 1992.

The Johnston Atoll area was used during the 1950s and 1960s as an American nuclear weapons test site—for both above-ground and underground nuclear tests. Later on, it became the site of a chemical weapons depot and the site of the Johnston Atoll Chemical Agent Disposal System (JACADS). All of the chemical weapons that were once stored on Johnston Island have been incinerated, and that process was completed in 2000 and JACADS demolished by 2003.

Between 1958 and 1975, several scientific sounding rockets were launched from Johnston Island.[7] There were also several nuclear test missiles that were launched from Johnston Island in 1962 during the "Operation Dominic" series of nuclear tests, from a launchpad at 16°44′13″N 169°31′26″W﻿ / ﻿16.7370°N 169.5240°W﻿ / 16.7370; -169.5240. Twelve thermonuclear warheads were exploded in all, one of which was deliberately disrupted when the PGM-17 Thor carrying it failed to launch scattering plutonium debris over the island. Afterwards, the radioactive debris and soils were placed in a 25 acres (100,000 m2) landfill on the island, along with residue from Agent Orange containers returned from Southeast Asia after the Vietnam War, PCBs, PAHs, dioxins, and sarin nerve gas from the Soviet Union and East Germany.[citation needed]

In 1963, the U.S. Senate ratified the Limited Test Ban Treaty, which contained a provision known as "Safeguard C". Safeguard C was the basis for maintaining Johnston Atoll as a "ready to test" above-ground nuclear testing site should atmospheric nuclear testing ever be deemed to be necessary again. In 1993, Congress appropriated no funds for the Johnston Atoll "Safeguard C" mission, bringing it to an end. Congress redefined the island's military mission as the storage and destruction of chemical weapons.

It was used for rocket-launched nuclear tests in the 1950s. In the 1960s it was the site for the operational Program 437 anti-satellite system. Several sounding rockets were also launched over the years. Known to have been used for 124 launches from 1958 to 1975, reaching up to 1158 kilometers altitude.[8]

In 2003, all structures and facilities, including those used in JACADS, were removed, and the runway was marked closed. The last flight out for official personnel was June 15, 2004.[9] After this date, the base was completely deserted, with the only structure left standing being the JOC building at the east end of the runway.

History since base was closed[edit source | edit]

On August 22, 2006, Johnston Island was struck by Hurricane Ioke. The eastern eye-wall passed directly over the atoll, with winds exceeding 100 mph (160 km/h). Twelve people were actually on the island when the hurricane struck, part of a contracted USAF crew sent to the island to monitor groundwater contamination levels. All 12 survived.[10]

Since the base was closed, the atoll is likely to have been visited by sailing vessels crossing the Pacific, as the deserted atoll has a strong lure due to the activities once performed there. One visitor blogged about stopping there for several days during a trip from Honolulu to the Marshall Islands.[12]

In 2010, a Fish and Wildlife survey team identified a swarm of Anoplolepis ants that had invaded the island. The crazy ants are particularly destructive to the native wildlife, and needed to be eradicated. A "Crazy Ant Strike Team" was formed to stay on the island for nine months to bait traps for the ants and eliminate them. The team camped in the old chemical weapons storage bunkers on the southwest corner of the island. It is believed that the ants arrived with private boaters visiting the island illegally.[13][14]

Dr Lisa Lobel's work at the Atoll on the impact of PCB contamination in reef damselfish (Abudefduf sordidus) demonstrated that embryonic abnormalities could be utilized as a metric for comparing contaminated and uncontaminated areas.[15]

In 1923, Johnston Atoll was designated a federal bird refuge by President Calvin Coolidge with Executive Order 4467.[16] The island was later converted to a National Wildlife Refuge and now includes 696 acres (2.82 km2) of land and over 800,000 acres (3,200 km2) of water area.[17] While the outer islets and water rights are part administered by the Fish and Wildlife Service, the actual land mass remains under Navy control for cleanup purposes. Along with six other islands, the atoll was administered as part of the Pacific Remote Islands National Wildlife Refuge Complex. On January 6, 2009, that entity was upgraded to the Pacific Remote Islands Marine National Monument by President George W. Bush.[18]

The unofficial flag of Johnston Atoll which was used to represent the island in a December 7, 2001, Pearl Harbor ceremony. The official flag for all U.S. minor outlying islands is the U.S. flag.

Johnston Atoll has never had any indigenous inhabitants, although during the late part of the 20th century, there were averages of about 300 American military personnel and 1,000 civilian contractors present at any given time.[1]

The central means of transportation to this island was the airport, which had a paved military runway. The islands were wired with 13 outgoing and 10 incoming commercial telephone lines, a 60-channel submarine cable, 22 DSN circuits by satellite, an Autodin with standard remote terminal, a digital telephone switch, the Military Affiliated Radio System (MARS station), a UHF/VHF air-ground radio, and a link to the Pacific Consolidated Telecommunications Network (PCTN) satellite.[citation needed] Amateur radio operators occasionally transmitted from the island, using the KH3 callsign prefix.

Johnston Atoll's economic activity was limited to providing services to American military personnel and the contractors residing temporarily on the island. All foodstuffs and manufactured goods were imported. The base had six 2.5 megawatt (MW) electrical generators supplied by the base's support contractor, Holmes and Narver, using Enterprise Engine and Machinery Company DSR-36 diesel engines. The runway was also available to commercial airlines for emergency landings (a fairly common event), and for many years it was a regular stop on Continental Micronesia airline's "island hopper" service between Hawaii and the Marshall Islands. 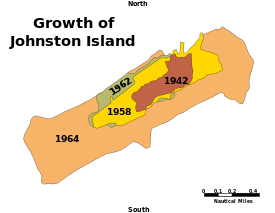 The size of Johnston Atoll was greatly increased by coral dredging.

The four islands compose a total land mass of 2.67 km².[1] Due to the atoll's tilt, much of the reef on the southeast portion has subsided. But even though it does not have an encircling reef crest, the reef crest on the northwest portion of the atoll does provide for a shallow lagoon, with depths ranging from 3–10 m (9.8–33 ft).

Its climate is tropical but generally dry. Northeast trade winds are consistent and there is little seasonal temperature variation.[1] With elevation ranging from sea level to 5 m (16 ft) at Summit Peak, the islands contain some low-growing vegetation on mostly flat terrain and no natural fresh water resources.[1]