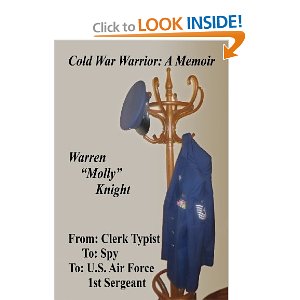 Cold War Warrior: A Memoir and over one million other books are available for Amazon Kindle. Learn more

Publication Date: September 28, 2012
Cold War Warrior is the memoir of a boy who grew to manhood in the service of his country during the height of the Cold War. As a Russian linguist in the United States Air Force Security Service, Warren Knight bore witness to the construction of the Berlin Wall, the U-2 incident, the Cuban Missile Crisis, and an adversary's Inter-Continental Ballistic Missile test. While manning a high-tech listening post on a remote Far Eastern island, or on a jungle survival course in the Philippines, the author's stories are both compelling and informative and document a chapter in the American saga that was as fraught with genuine peril as any in our history.
Show more
Show less

Customers Viewing This Page May Be Interested in These Sponsored Links

(What's this?)
See a problem with these advertisements? Let us know

5.0 out of 5 stars
(3)
5.0 out of 5 stars
5 star
3
4 star
0
3 star
0
2 star
0
1 star
0
See all 3 customer reviews
Share your thoughts with other customers
Write a customer review
Most Helpful Customer Reviews
5.0 out of 5 stars Cold War Warrior:A Memoir February 19, 2013
By max
Format:Paperback
Cold War Warrior:A Memoir, By Warren "Molly" Knight sheds as much light on U.S. Air Force Cold War intelligence as can probably be reported. Men like Sergeant Knight are due a great deal of credit for serving their country in dangerous areas of the world risking life and limb for the country's security. He also intersperces personal remembrances with his military experiences which add a great deal to this fine book.
Comment |
Was this review helpful to you?
Yes
No
5.0 out of 5 stars Silent Warrior Turned Story Teller February 18, 2013
By BerlinerPhil
Format:Paperback
Master Sergeant Knight describes his Air Force and related civilian careers in an easy to read style. He served in administrative, intelligence collection and leadership roles in locations around the world including remote sites, airborne and behind the Iron Curtain.

Included are descriptions of poignant moments of mission stress and what it took to get the job done. And, woven throughout are brief glimpses of the sacrifices made by the author and his family which came as part of his work and where it was necessarily located.

I first met Sergeant Knight over 50 years ago during tense times in Berlin, Germany. He was a well regarded operations supervisor then and a well regarded story teller now.
Comment |
Was this review helpful to you?
Yes
No
5.0 out of 5 stars A fascinating glimpse into a secret war February 13, 2013
By James H Blunt
Format:Paperback
This book gives us a glimpse into the world of Communications Intelligence that was a major factor in winning the Cold War. I served with MSGT Knight in Berlin and can only say that although our accomplishments remain largely classified, they were a critical part of our intelligence structure.

We served critical roles, many now unclassified, in the USAF Security Service and other Air Intelligence organizations. We were the silent warriors, but were a vital part of providing timely intelligence and maintaining U.S. superiority in the Cold War.
I recommend the book to all who served in that role

Your Shopping Cart is empty.

Give it purpose—fill it with books, DVDs, clothes, electronics, and more.

Check your Internet connection and go to your cart, or try again.

Look for Similar Items by Category

Your Recent History (What's this?)